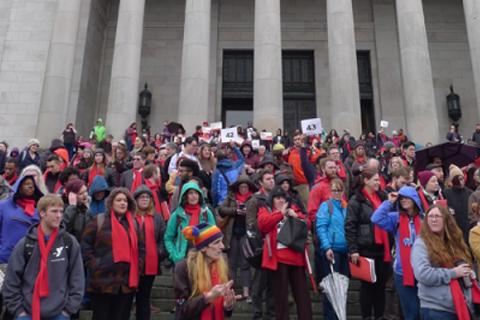 March 14, 2018
Impacts of Client-Centered Advocacy
By:
Salma Siddick
This year, YWCA staff advocated with clients and other community members in Olympia for equal housing. Our day was made more special because we invited clients to advocate for themselves.

In early February, YWCA invited clients to advocate for themselves at Housing and Homelessness Advocacy Day (HHAD) in Olympia. Clients were brought from both King and Snohomish Counties to join in HHAD and appeal to their legislators for equal housing laws.

We were thrilled to hear that most of our clients had actually advocated before, like Esmeralda, representing the 43rd District, who was on her third year at HHAD and was passionate about housing. She felt issues like funding for recovery and certified peer counseling needed to be addressed so that “clients feel that they are being listened to from a place of understanding.”

And Anthony, representing the 32nd District, who advocated many times for equal housing in numerous states, but for whom this was his first Advocacy Day in Washington. I asked Anthony why he was advocating and what he hoped would come of his time in the Capitol. He responded, “I have no expectations, but I do have requirements: I require them to replenish the Veterans Association Bill.”

New comer Joanne, representing the 43rd District, moved to Seattle a few months ago and has been on the housing waitlist for one year. She hopes that “we can come up with solutions for issues as a way of bridging the gap.”

Hosted by the Washington Low Income Housing Alliance, "YWCA had been fighting for at least three housing-related bills since the beginning of 2018, all of which passed in both houses of the legislature as of last week!"

“We attended to give support to our coalition partners and advance the housing bills,” said YWCA’s Digital Advocacy & Engagement Manager Eric Bronson. “Participant-centered advocacy” was the new approach that Bronson and YWCA Political Strategist Heidi Park implemented. Who better to speak about homelessness issues if not our clients who have and/or are currently experiencing homelessness? YWCA’s Firesteel program amplified client voices through social media, and by using our new Call to Action tool that advocates via text to legislators. You can read more about YWCA’s Firesteel program in action at HHAD on our blog.

As I looked out at the sea of people advocating on the steps of the Capitol and saw a number of clients holding signs up and advocating, I wondered what the experience was like from their perspective. On the bus ride home I asked what the day had meant and what their takeaway was.

Lindsey felt “grateful to YWCA because they offer so much more than housing, but I needed to find housing first.” Queen said, “She would return any day with YWCA, because housing should be a top priority in every county.” Joanne was touched by the speech from Senator Sharon Nelson (D-Maury Island) because she felt effective action was being taken by the assurance that people would not being unlawfully evicted. 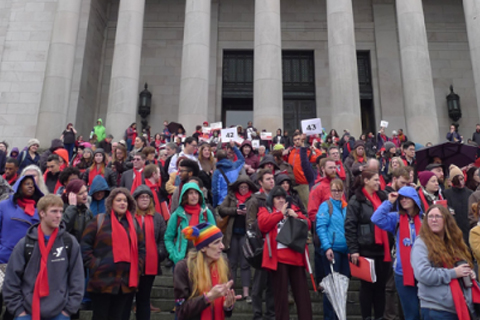