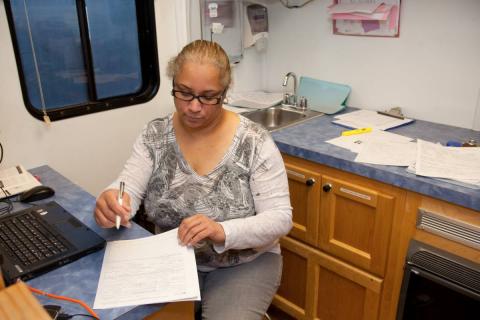 July 28, 2020
Staff Spotlight: Healthcare and Race
By:
Eric Bronson
YWCA's Health Access programs work to increase wellness and safety in our community and reduce systemic barriers that drive inequities in health care access, chronic disease, and life span. We talked with Kiasha Gamble and Maisy Lane from YWCA's Health Access programs about how the healthcare system prevents us from achieving racial equity.

Within YWCA's Health Access there are two programs. Kiasha Gamble is a Program Assistant for BABES Network, a nationally-recognized peer support program for women living with HIV and AIDS. Maisy Lane works as the Program Manager in Health Care Access, which works to connect participants to the healthcare exchange and public health insurance.

How do you see the healthcare system preventing racial equity in your work in health access?

KIASHA: I see it when we have two clients experiencing the same symptoms, and the doctors are quick to address the white woman’s issue before they kind push off the Black woman or minority woman. They'll say, "We’re going to monitor this" or "We’re going to watch it gradually over time" instead. If the same issue is held by a white woman, they're quick to address that by getting a prescription filled out right away.

I think it would be better if there were more Black doctors, because they have a higher level of understanding. They get it, they culturally get it, and they'll know what's going to work for this demographic and be more attentive.

I think it’s time for the healthcare system to stop basing everything on the one demographic group of white people. It doesn’t always work for everyone else across the board. There's all sorts of people, we have different languages, different skin tones, different genes, and different cultural beliefs. It doesn't matter what color you are, it matters how your body works. Learn how my body works, don’t see my skin tone, learn me as a person.

MAISY: Racism is the public health emergency (King County recently made a declaration recognizing this). The toxic stress of racial inequity is killing Black people, especially Black women, and more so Black moms.

How are Black women in particular impacted by this?

KIASHA: It goes back to the history of healthcare, involving minority people. They carried out tests on Black people without anesthesia, because they believed that Black people didn’t feel as much pain. But this is an on-going problem, especially in gynecology. Gynecologists will blame a Black woman for her own yeast infection because they hold racist assumptions about what kind of food she ate. They're condemning people of color for having the same issues of white people, but they don't believe us.

That's a lot of the reasons that Black women won't go to the doctor. You go to the doctor to get something fixed that’s wrong, not to play the waiting game. I hear this from the women of color in our BABES peer groups, and in my personal life. This is almost handed down, like an unspoken rule among Black women, to do home remedies before going to the doctor because there's a certain level of distrust.

That is heightened by health issues that we’re dealing with. It’s more scary, we don't know if the doctor is going to help us or use us as lab rats like in those anesthesia tests.

In their TED Talk, the founders of the health nonprofit GirlTrek Vanessa Garrison and T. Morgan Dixon explain how the trauma and toxic stress from systemic racism is killing Black women. T. Morgan Dixon says it’s the equivalent of a 747 full of Black women crashing everyday. A plane full of Black women killed by preventable illnesses. That plane has took off yesterday, today, and has already taken off for tomorrow until we address these systemic causes.

How does it particularly impact women living with HIV?

KIASHA: When you’re dealing with pain and side effects from HIV, women are told to just deal with it, or that it’ll get better on its own. When it doesn't get better, medical providers will blame her for not taking the medicine correctly. You should not blame the patient, period. If the patient is coming to you and telling you the side effects are not subsiding, well then it's time for you to switch medicine, for you to try something else.

It seems like they're not concerned with the side effects that we deal with as African Americans, if it works for anybody else, suffer through it.

If you want to learn more about how race, gender, and healthcare intersect, read our other blog post on what medical racism is, and our reading list on Black women's health. You can also join us at our virtual 2020 Inspire Luncheon on September 10 to help support YWCA's programs like BABES and Health Care Access.