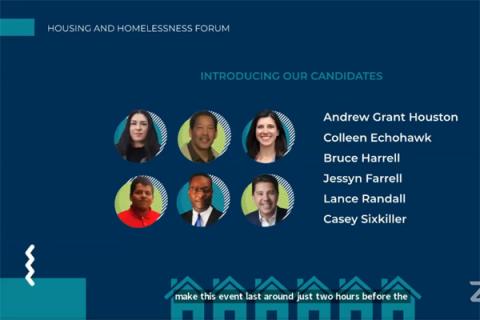 July 20, 2021
Seattle Candidates Answer Questions about Housing
By:
Eric Bronson
Ahead of an election that will determine key members of Seattle's leadership, YWCA joined as a co-host of two candidate forums held by We Are In, the network organization for housing and homelessness service providers in King County.

Asked by Maya Manus, Co-Chair of our Public Policy Committee, YWCA's question was, “Since 2015, the Department of Construction & Inspections has performed periodic inspections of rental units in the city with the goal to inspect each unit every 10 years. As Mayor, how will you ensure with greater frequency that people are living in housing that meets health and safety standards, and that the owners of buildings are meeting their obligations?" 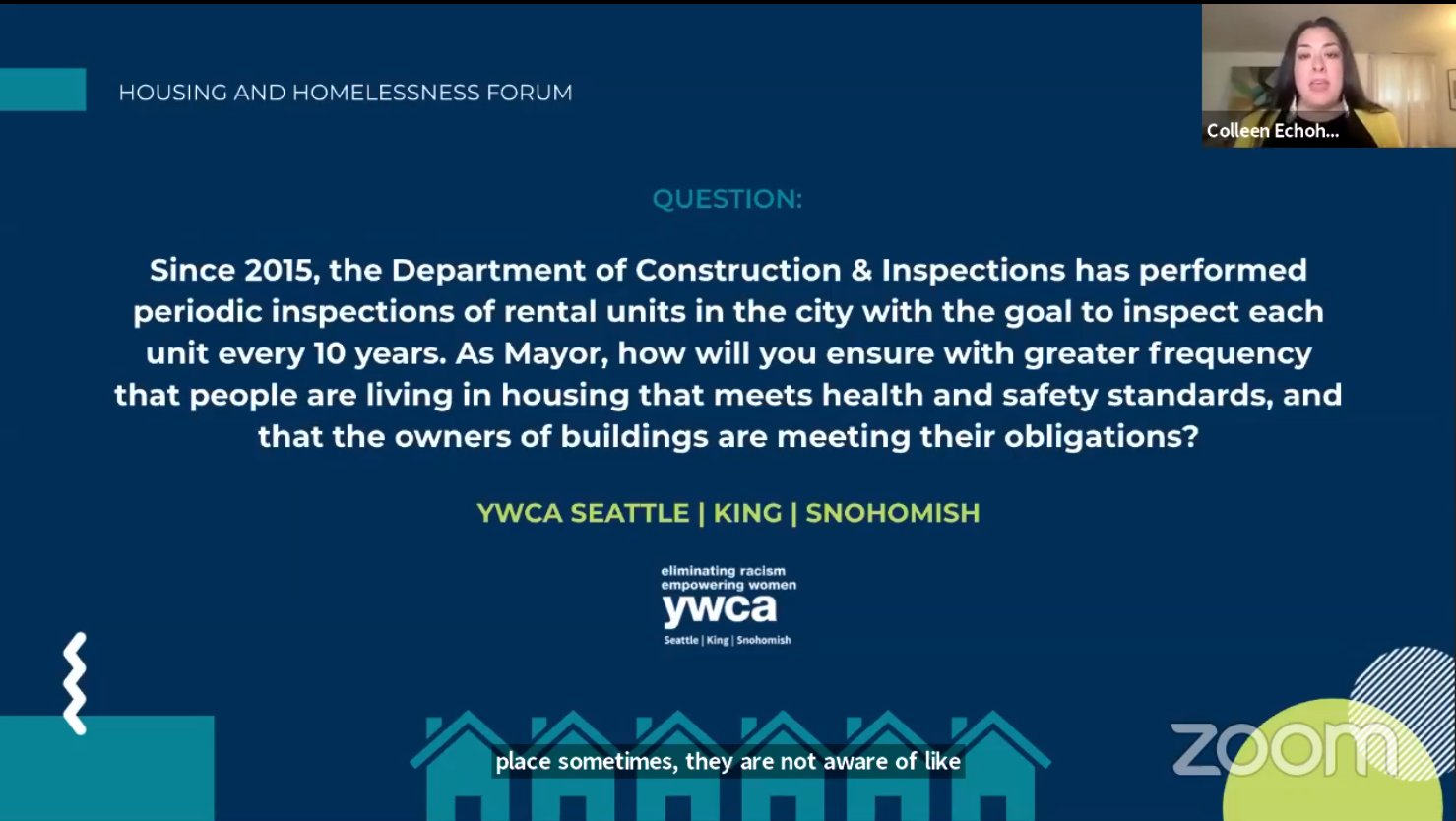 Overall, the candidates expressed a strong interest in improving the speed of inspections and more comprehensively informing tenants of their rights in Seattle.

Colleen Echohawk said, “The priority for me is to ensure that any kind of housing that is out there for anyone is beautiful, clean, [and] anyone who lives there can live their lives successfully.”

Jessyn Farrell promised to ensure inspections are done in a timely way by further “funding enforcement and funding inspections.”

Bruce Harrell noted his role in passing the existing inspection policy saying, “We did pretty much as best we could from a policy standpoint to ensure that rental units were safe.”

Andrew Grant Houston spoke about his own duties as a licensed architect to maintain the health and safety of any building he designs, and that holding landlords accountable is “an issue of funding. If we want this to work, we need to expand staff and funding.” 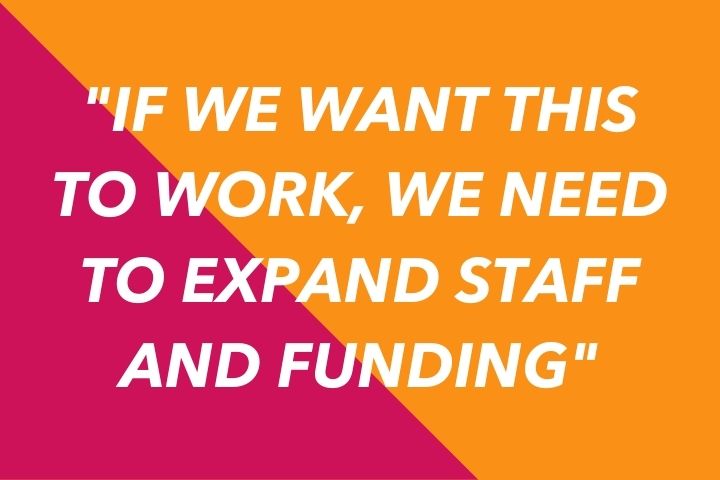 Lance Randall said he would like to look at moving to a system of full inspection reviews every five years, rather than every 10. He also said he wanted to improve the connections between police and security at affordable housing buildings, and to “make sure landlords have adequate funding to maintain units.”

Casey Sixkiller, who oversees the Department of Construction & Inspection currently in Seattle, talked about prioritizing these inspections during COVID and supports increasing outreach on tenant rights to both tenants and landlords.

At the forum for City Council position 9, we were joined by candidates Sara Nelson, Nikkita Oliver, and Brianna Thomas.

Local pro-housing groups Seattle For Everyone and the Housing Development Consortium joined together to ask the question, “About 75% of Seattle is zoned for single-family use. As a result, only 5% of all net new units in Seattle from 2010 to 2017 were built in areas zoned single-family. What do you propose, if anything, for allowing new housing types in these neighborhoods in the future? What timeline would you think about for implementation?”

All three candidates agreed that single-family zoning had to change, but their plans emphasized different elements of the solution.

Brianna Thomas focused on allowing for intergenerational units of two, three, and four bedrooms that can fit a whole family. 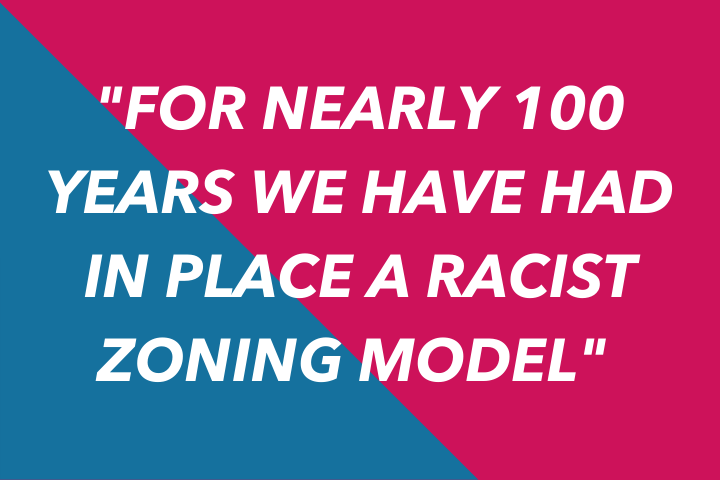 Nikkita Oliver said, "For nearly 100 years we have had in place a racist zoning model" and promised to not only end the zoning restrictions on multifamily housing, but also on childcare centers and grocery stores which can serve the neighborhood. 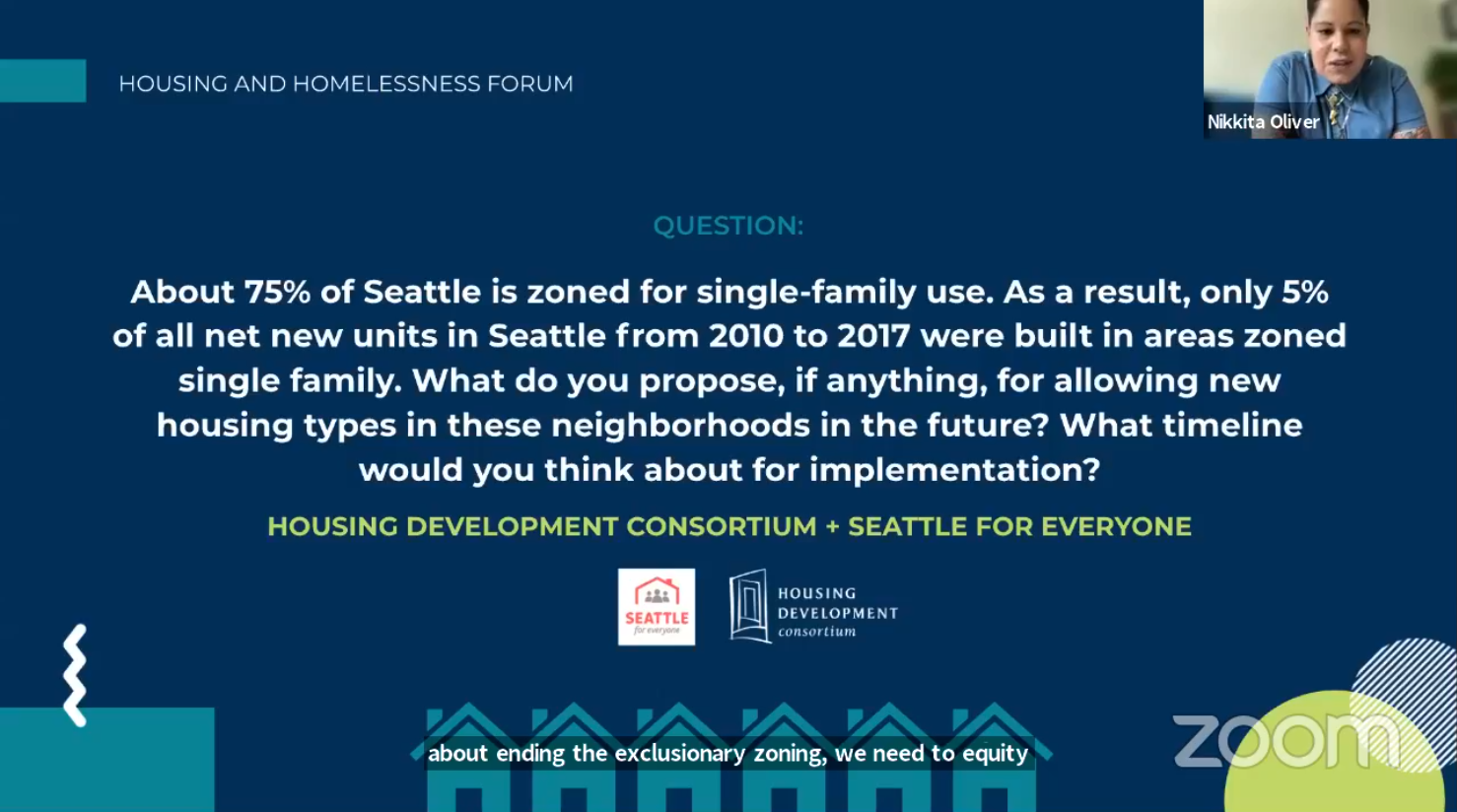 YWCA also asked a question at this forum, related to the unelected Design Review Boards, who review proposed multifamily housing buildings and then require the developers to make changes to meet their aesthetic preferences.

Maya Manus asked, “One factor that delays much-needed housing from being built in our city is the process of design review. Will you commit, with funding, to looking at best practices for design review in our region and in other similar size cities, eliminating bottlenecks that delay units, and adding a Race and Social Justice Initiative (RSJI) framework to the process?”

All three candidates agreed that the design review process does not work.

Sara Nelson called it “broken and severely flawed” and promised to take a “serious look ” at fixing it.

Nikkita Oliver pointed out that the Design Review process is not only "a bottleneck that slows down housing, but it gives very little say to neighborhoods” and expressed a strong desire to see the city’s RSJI fully funded with staff members dedicated to enacting it.

While Oliver spoke about standardizing the RSJI across the City so no department is left uncovered, Brianna Thomas disagreed and said that it should vary by department, as what’s needed to achieve racial justice in the Deparment of Transportation is different that what is needed for design review.

There were many other important and insightful questions asked of the candidates at both forums, and if you'd like to view them yourself, the full recordings of each event can be found on We Are In's Facebook video page.

Exercise your right to vote

Ballots are already in the mail, so don't forget to cast your vote in the upcoming primary election by August 3. You can register to vote and get helpful text message reminders to mail your ballot by signing up at the YWCA Voting Center. If you live in Seattle, you can also use your Democracy Vouchers to fund the candidates you support.

You can also join us on September 14 for the virtual YWCA Inspire Luncheon: Reclaiming Our Power where our amazing keynote will talk about the fight against voter suppression. 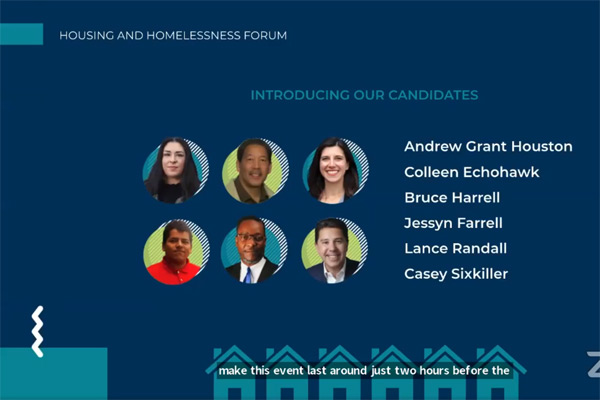