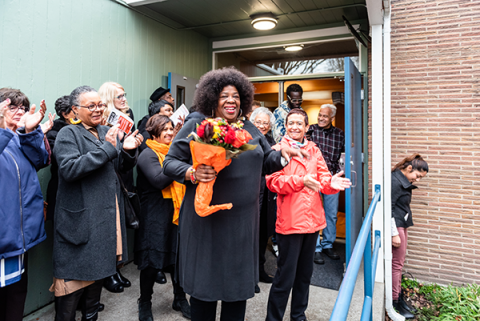 November 26, 2019
A Homecoming for Phillis Wheatley
By:
Eric Bronson
YWCA marked a century of service to the women of Seattle's Central District by restoring the name of our branch there to Phillis Wheatley, the revolutionary-era Black poet and icon.

We celebrated 100 years of service in Seattle’s Central District by restoring our East Cherry branch back to its original name, the Phillis Wheatley Branch. The City of Seattle also made a proclamation declaring November 12, 2019, “Central Area YWCA Day.”

YW leaders Patricia Hayden and Maria Chavez Wilcox spoke about the importance of the location to Black women in the Central District, and the importance of keeping Black women in the history of the area. A number of women who had been part of the branch over the past 50 years told their stories and their memories of the building and the women who worked for YWCA there.

Music was provided by Maya Soleil drummers, and the incredible food of That Brown Girl Cooks! was catered to everyone in attendance.

Who was Phillis Wheatley?

Phillis Wheatley, was born in West Africa in 1753 and sold into slavery at 7 years old, when she was bought by a family of Quakers in Boston.

The Wheatley’s taught Phillis to read and write, and her talent for poetry quickly made her famous after she became the first Black woman to publish a book in America, Poems on Various Subjects, Religious and Moral in 1773. Scholars now believe that her poetry contained hidden meanings to speak to the experiences of Black Americans who had been enslaved.

Phillis was emancipated after her slaveowner’s death, got married, had three children who died in infancy, and passed away in poverty in 1784.

Around 1900, Black women in the North began to found Phillis Wheatley clubs to help young black girls moving out of the South. Many of these clubs were branches of the local YWCAs in each area.

History of YWCA in the Central Area

Although membership in YWCA was open to any woman, the services at the downtown Seattle location were not. African American women who were members of YWCA’s Culture Club were denied access to vocational training and overnight lodging at its flagship location.

As YW’s services for African Americans expanded, a new home in the Central Area was built in 1952 and named the East Cherry Branch.

So our rededication of the branch to the name Phillis Wheatley (spelled the way she preferred) is truly a homecoming for a figure that meant so much to the Black women and girls who found community at YWCA throughout the last 100 years.

During the rededication ceremony, YWCA board member Leslie Jones told the story of a young African American woman at the age of 14, pregnant and expelled from school, who came to YWCA.

"This young girl was embraced by a community that said, 'Baby, you 'gon be alright.' She was able to get a sense of belonging, there was no judgment. She was taught how to be a parent... that she can continue to get her education, and get the kind of advocate this young girl needed to have.

That story is my story

I know we're going to be changing the name, but I want you to know that there will never be a change in the level of dedication and commitment that this organization will continue to have going forward."

At the end of the program, Maria and Patricia led everyone outside for the unveiling of the new sign bearing the name YWCA Phillis Wheatley Branch:

You can check out all the pictures and videos from the event at our YWCA gallery. Do you have memories of the Central District YWCA that you'd like to share? Post them on Twitter or Facebook with the hashtag #yw125. We'd love to hear your stories! 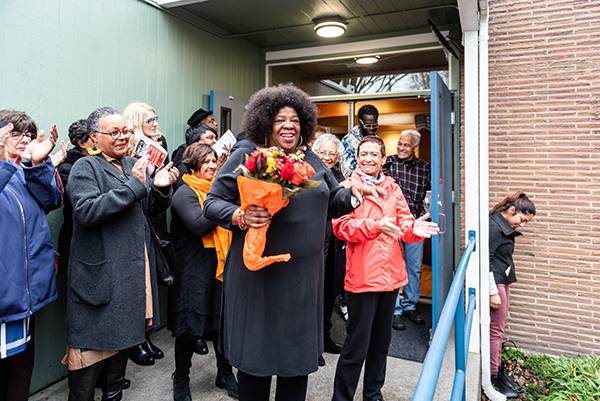