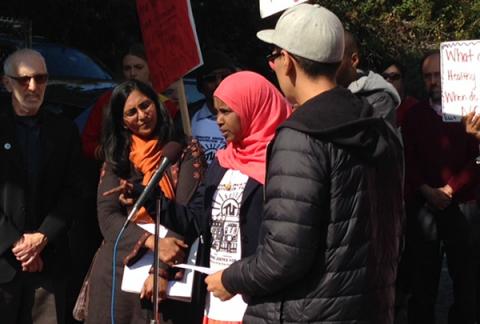 March 26, 2018
Advocacy Sheroes Making History
By:
Eric Bronson
March is Women’s History Month, and we're taking a moment to look back at the women who've already made history as advocates in Seattle and the state of Washington. Sahro Farah and Mindy Woods have a lot to teach us about how to mobilize for change in our community, and how to collaborate with organizations to make advocacy a success.

Sahro Farah lived in dangerously neglected housing, with numerous code violations and appalling conditions for her and her children. Not only had her landlord refused to fix anything, but he was raising her rent by more than double to $1,150 a month. Seattle law made it legal for him to raise rents, even though the building had failed inspection.

Sahro was first interviewed by Firesteel in 2015, and she told her story in this video.

Former Firesteel Advocacy Manager Denise Miller made some other observations at the time of the interview:

As immigrants and refugees, Sahro and her neighbors are very vulnerable. Some are recovering from traumas they experienced in their home countries, and I’m appalled that they are being re-traumatized in their new country living in these conditions and on the edge of homelessness. The people I met in Sahro’s building want what all of us want: Opportunities to work, raise healthy families, and be active in their community. This all starts with a safe, stable home.

Sahro told me that she and her children were struggling to sleep as they worried about the possibility of becoming homeless. I’ve also had a hard time sleeping thinking about the long-term effects that unhealthy living conditions and the stress of housing instability may have on Sahro’s kids. When students experience homelessness, they struggle to learn. Many fall behind in school, and are less likely than their housed peers to graduate. Our current housing crisis has the potential to create long-lasting problems for children, and we need to do something about it.

After connecting with the Tenants Union and organizing with advocates there, Sahro held a press conference with Councilmembers Kshama Sawant and Nick Licata in front of her apartment building. Journalists flocked to the event, and the story of the deplorable conditions Sahro lived through made the front page of the Seattle Times.

When Washington enacted modest fees on certain real estate documents over 10 years ago to support housing and homelessness programs, the fees were set to drop off to $0 by 2019. However, the housing crisis and the number of people experiencing homelessness did not drop, rising instead to 11,643 by 2017. Losing these fees would amount to losing a staggering 60% of all funding in Washington for services that move people experiencing homelessness into stable housing.

This led advocates to push for making the funding permanent. One of those advocates, Mindy Woods, told her story of becoming homeless with her teenage son.

By using the power of her story that day, and by organizing with the Washington Low Income Housing Alliance and Firesteel, Mindy communicated the critical need for programs to help families like hers thrive. With that power and the stories of other advocates, we succeeded in keeping the fees at their existing levels to keep homelessness services working across Washington.

But Mindy didn't stop there, and as a tireless advocate for this issue, she helped pass the final bill this year that enshrined the funding in law permanently; House Bill 1570. Now cities will have the flexibility to change those fees to match the scale of their homelessness crisis, and to spend the money on the solutions that go the furthest. To celebrate the passage, she attended the signing ceremony to see Governor Jay Inslee sign the bill into law:

This Women's History Month, we're grateful to honor amazing advocacy champions like Sahro and Mindy. Their lived experiences and hard work at organizing their communities have benefited all of us with a better Washington. There were many more tenants in apartment buildings like Sahro's in Seattle, and there are many more moms like Mindy, trying to find a safe place to sleep with their sons. Mindy and Sahro have made all their lives better, and that is why we honor them this month. 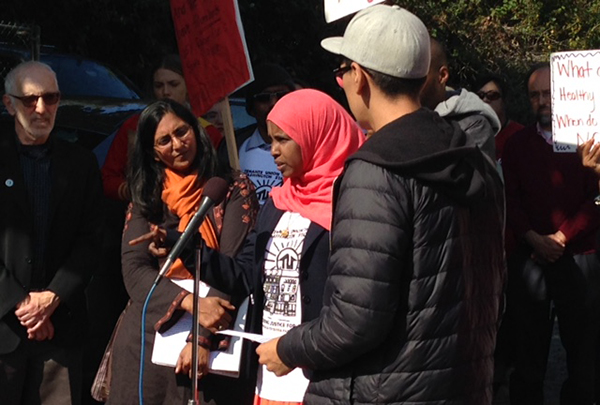