October 1, 2019
Candidates Tackle Human Services Questions at Forum
By:
Eric Bronson
Candidates for Seattle City and King County Councils answered questions from human services providers and the public. Learn where candidates stand on the issues most important to you!

On Thursday, September 19, volunteers, neighbors, and candidates for Seattle City and King County Councils filled the cafeteria of the Seattle World School. They were all there to attend the Candidate Forum hosted by the Seattle Human Services Coalition, providing voters a chance to hear from the candidates running for Seattle City Council and King County Council in this November’s election.

The forum was moderated by South Seattle Emerald founder and journalist Marcus Harrison Green, and questions came from both the organizers and from the audience. Not all candidates showed up to the forum, leaving some Seattle City races with just one candidate in attendance, and a few King County races with no one to answer questions at all.

Asked about how they would work to end gender-based violence and provide safety, Jeanne Kohl-Welles spoke about her work on the King County Board of Health: “I created a subcommittee on domestic violence, gender-based violence, and missing and murdered indigenous women and girls... That's something very concrete that does create policy and law.”

Abigail Doerr, who is running against Kohl-Welles for County Council, spoke about how housing affordability factors into domestic violence, saying “If you don’t have a stable place to live, you stay in unsafe situations longer. We do not have enough housing in KC to make sure that women are housing secure.”

Tammy Morales, candidate for Seattle City Council District 2, spoke about how domestic violence advocates should be present at every call that police go out on. Furthermore, she also said "I don't think that people should be arrested at all if they're the person who's the victim in the situation. That leads to racial disproportionality when it comes to who's arrested."

Another widely discussed topic was the affordable housing crisis, and the surge in people experiencing homelessness that it has caused. District 4 City Council candidate Shaun Scott talked about three specific ways he'd like to raise funds for social and affordable housing, including having the city and county bond against their debt to raise money, a "speculative real estate tax" which would tax developments if they had units laying vacant for long periods of time, and an excess compensation tax, which would charge executives who are paid hundreds of times what their average worker makes.

For District 5, Debora Juarez expressed her disgust at federal and local attempts at "demonizing homeless people, demonizing how we shelter them, demonizing how we pay for it." Her challenger Ann Davison Sattler wants to reduce permit times for housing, and increase density around transit hubs. She also said we need to be thankful for landlords, described tenants and landlords working together as "a symbiotic relationship, and there's no reason to have it be divisive."

Thanks to everyone who came out to the forum, and if you want to read more about the candidate's positions, many of them completed the SHSC candidate questionaire earlier this summer. Finally, if you haven't registered to vote yet, or if you're not sure, check your registration at Washington's election page. Local elections are critically important to our daily lives, and your voice should be heard! 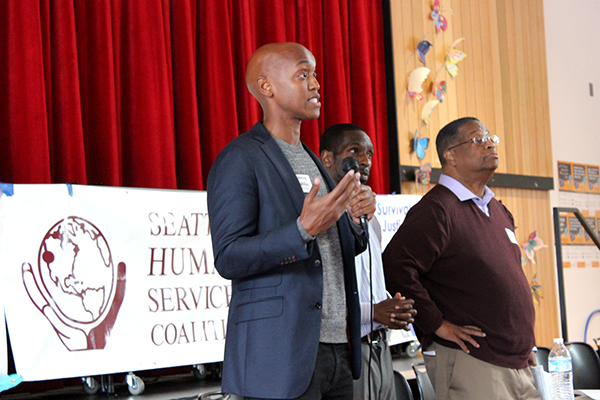