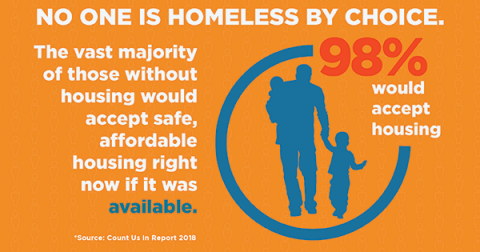 These myths have been aided and perpetuated by their continual repetition, whether in city council hearings, signature campaigns, or in the major media outlets of the region. The fact that such blatant falsehoods are widely accepted as fact demonstrates first and foremost that the personal biases of our thought-leaders and fact-checkers have overrun their own supposed objectivity, and personal biases are most powerful when they tap into a culture of racism and classism.

The data on each of these myths is crystal clear, and has repeatedly shown that many of our preconceptions are completely wrong about what the causes and solutions to homelessness are. The strength of the data is so overwhelming, that the continued belief in the myths is actually quite stunning.

For those of us who believe that evidence and data matter, and that public policy should be based on them, we must begin to undo these harmful myths ourselves. In the three years since officially declaring the homelessness crisis, the conversation in Seattle has waxed and waned between compassion and contention. What we are providing today are graphics that show just what homelessness really looks like, and what is needed to solve it. 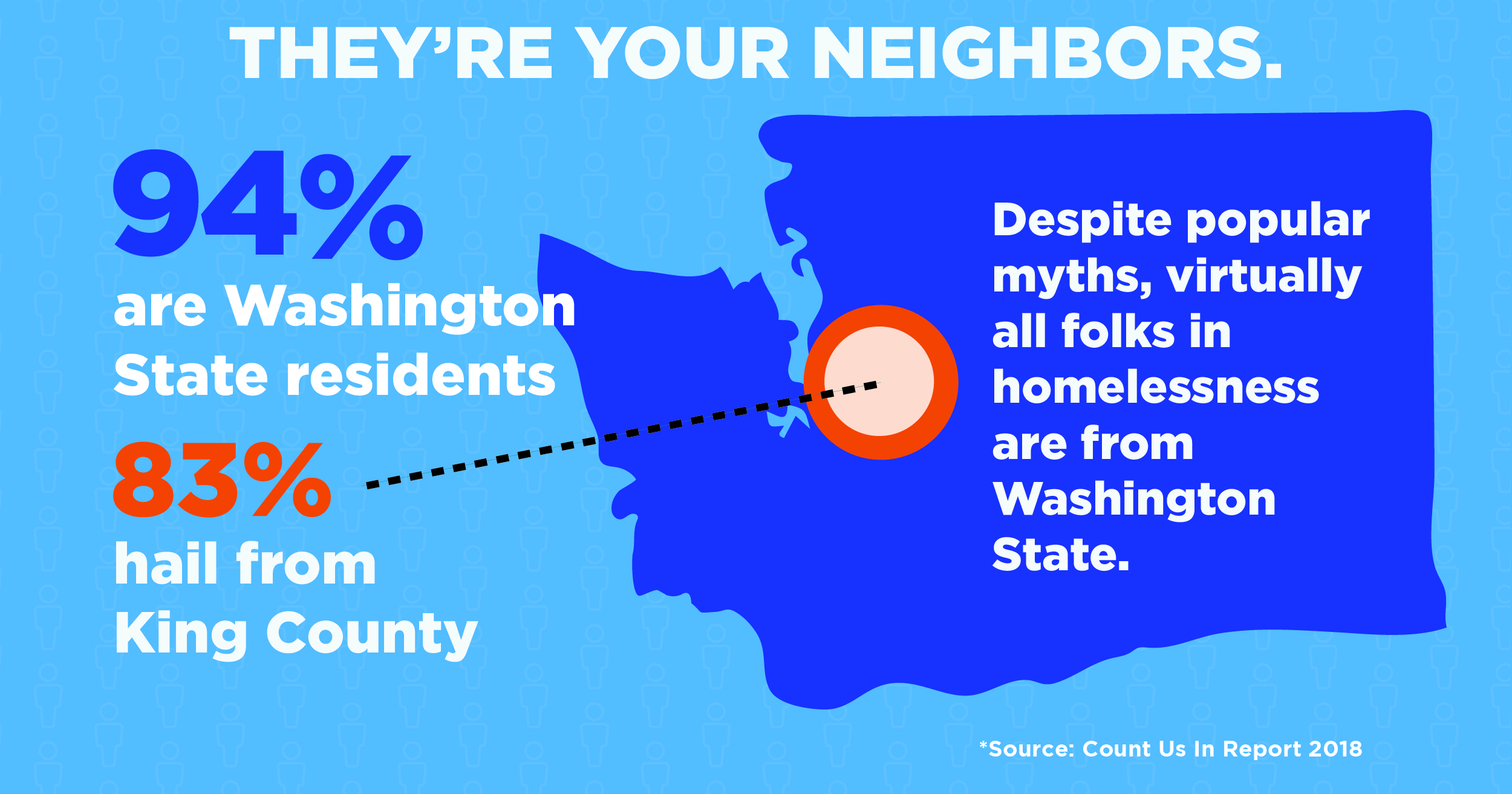 Those experiencing homelessness in our state are the same people who were living here before being homeless. This becomes even more blindingly obvious when you look at the number of homeless students in Washington, now 41,000 children. Children growing up with housing instability or homeless are more likely to be homeless later in their life. So the idea that we can only explain the existence of so many folks in homelessness by looking outside our own state is ridiculous. A quick look into our schools will show you exactly where homelessness in Washington begins.

No One is Homeless by Choice 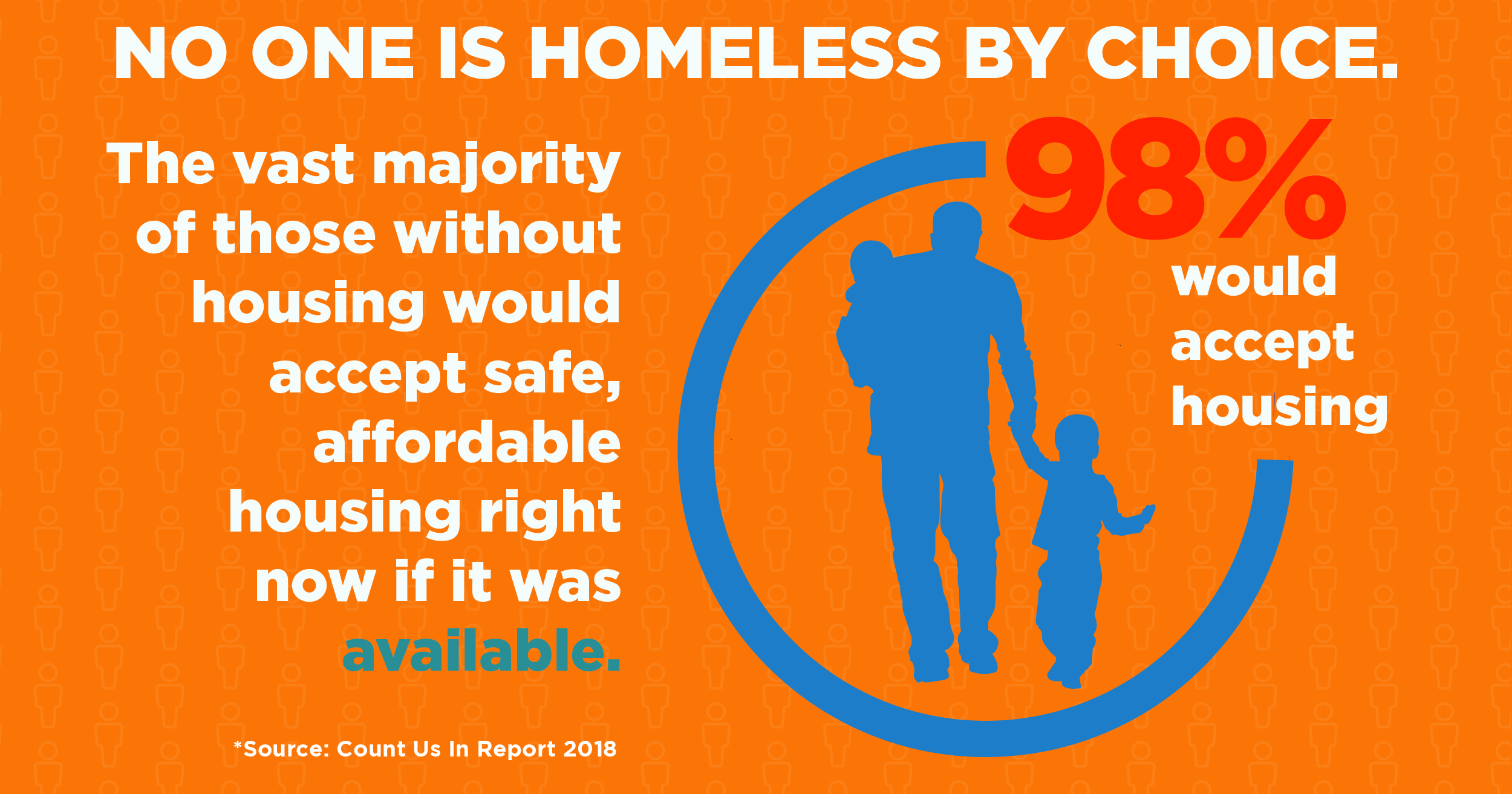 98 percent of those surveyed by the Count Us In report would accept safe, affordable housing if it was available. The experience of homelessness is traumatic and makes every aspect of life more difficult and stressful. No one chooses to experience those things.

Our Programs are Working 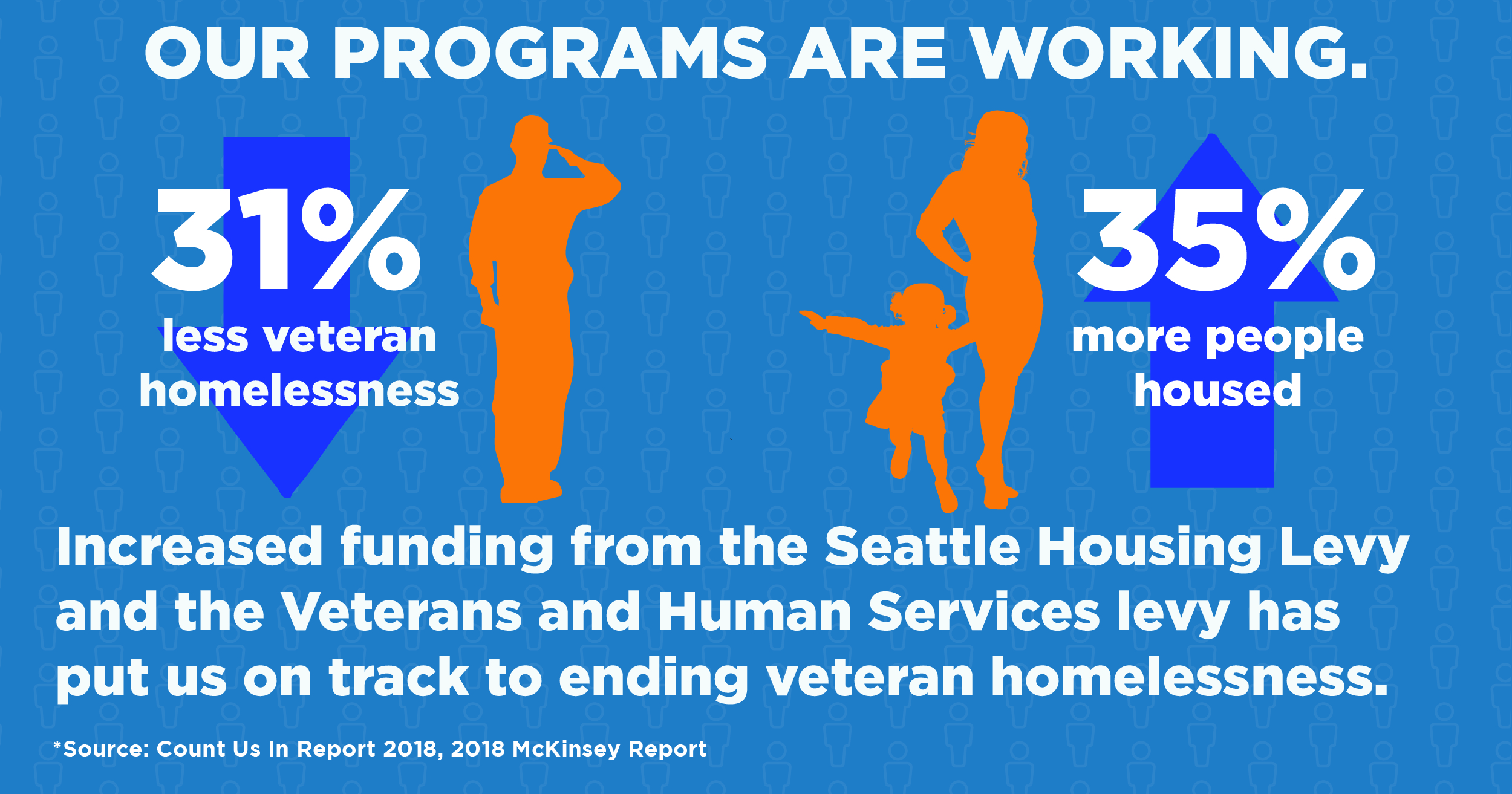 The largest decrease in homelessness in King County was among veterans, who have been the subject of a concentrated campaign on the local, state, and federal level to end homelessness for servicemembers. This success is the result of that coordination and funding, but also due to the cultural competency of programs that are tailored specifically to those they serve. Building programs that address the specific barriers that affect specific groups is the foundation of how King County was able to house 35 percent more people a year.

The problem is growing faster than the solution 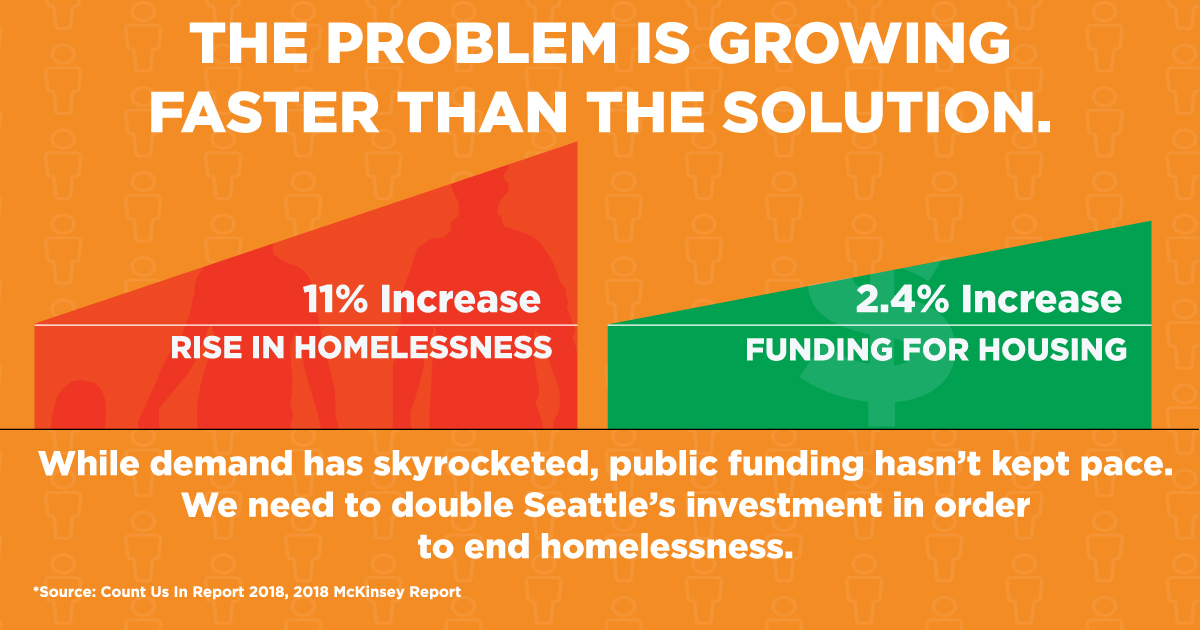 The McKinsey Report in particular illustrates this point well. In their study, originally commissioned on behalf of the Seattle Chamber of Commerce, McKinsey & Co found that while the number of people entering the homelessness system increased by 11 percent from 2014 to 2017, the dollars spent to end homelessness only increased by 2.4 percent. Most interestingly, the amount of those funds coming from the State actually decreased by 17 percent. The report also found that to end homelessness today in King County, we would need about $150 million more in affordable housing, which is close to the amount raised by the Seattle Housing Levy.

Affordable housing is the only answer 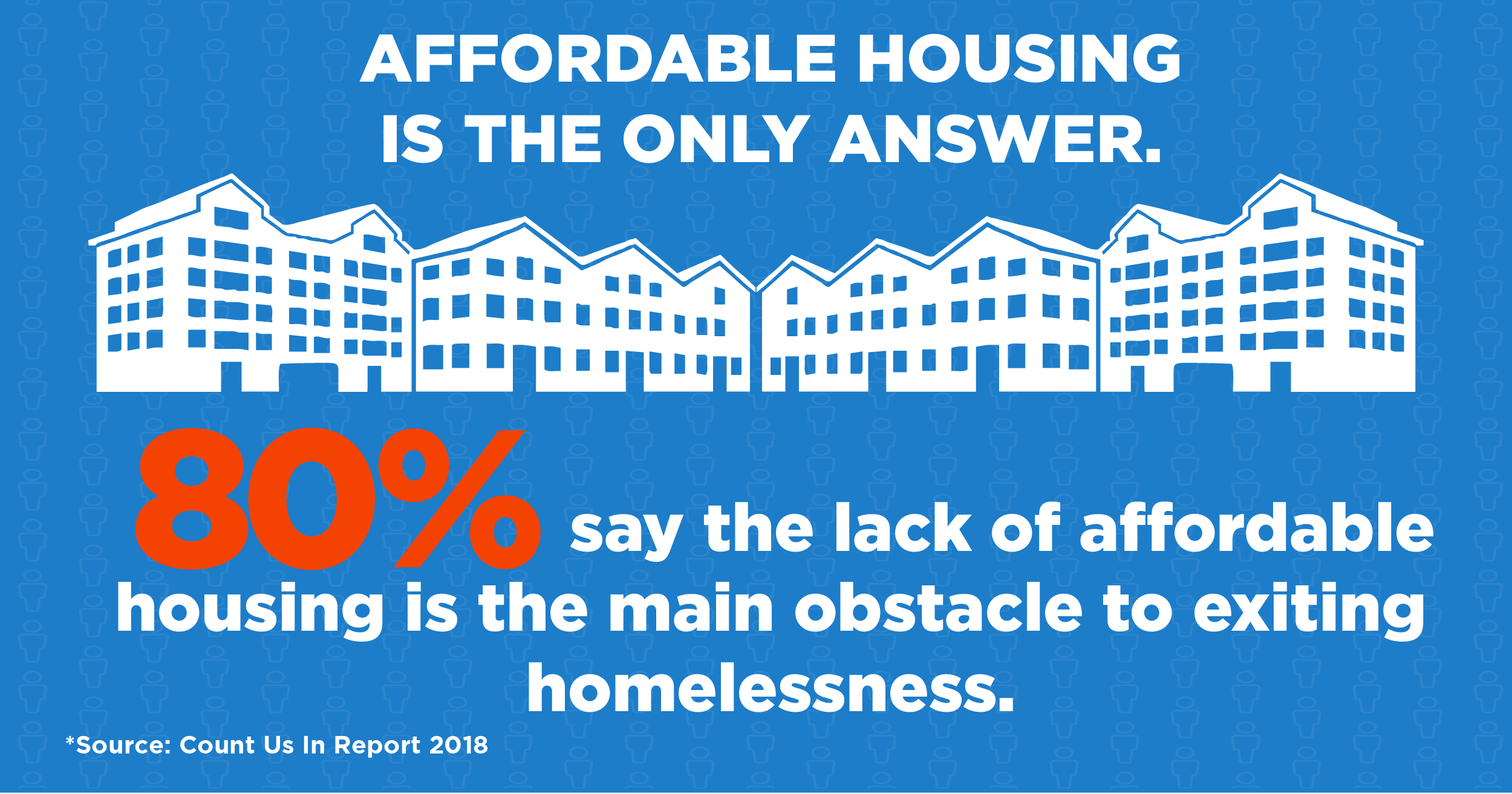 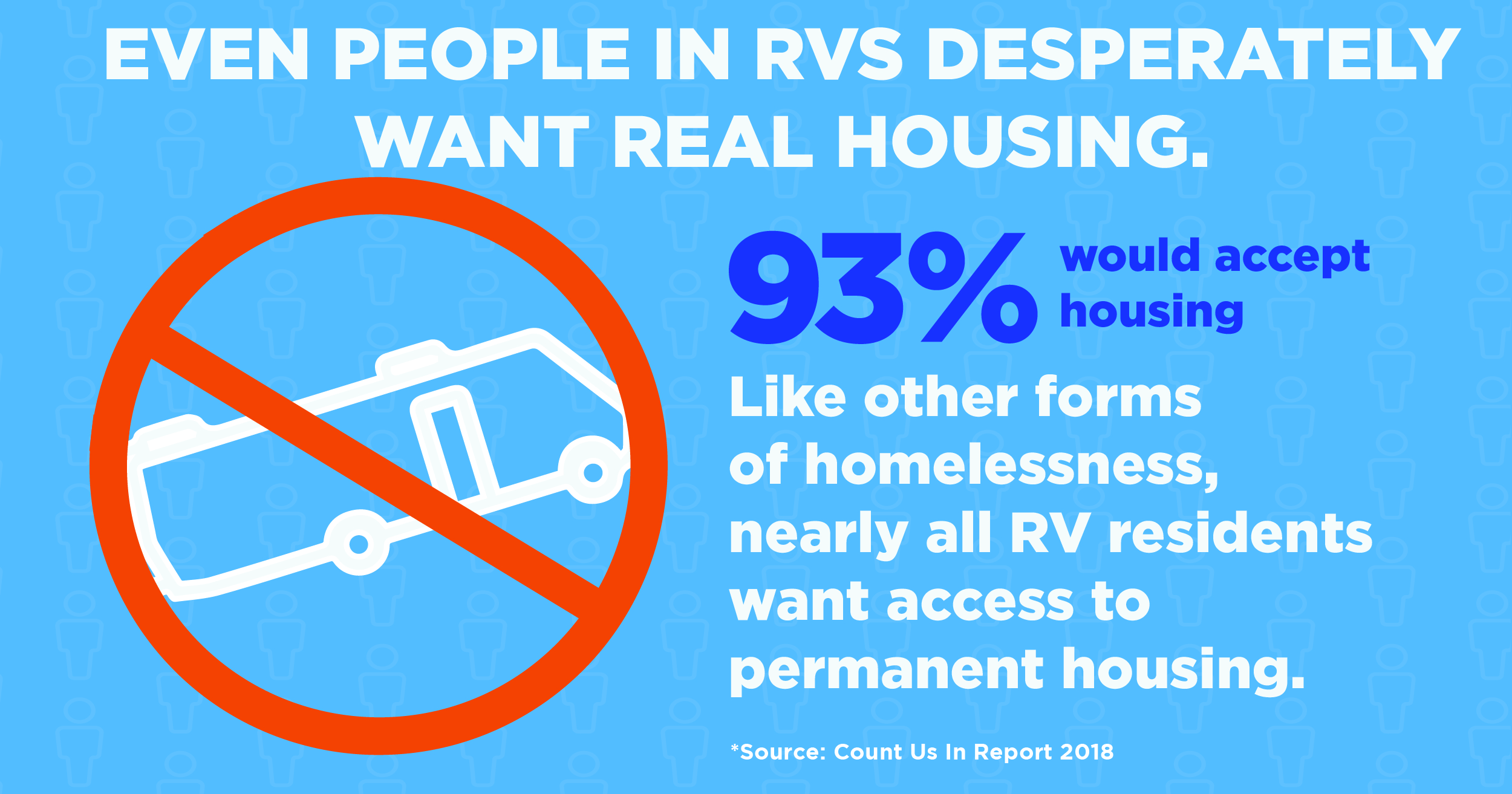 There is no form of homelessness that is more comfortable than a real home. Virtually the same number of people living in RVs want permanent housing as folks sleeping in shelter or on the street. This can help Seattle design programs for vehicle campers, by removing this excuse for why poorly conceived or managed programs haven't succeeded.

Facts for a new framing

Each of these facts are desperately needed in our conversation about homelessness today. To help build a big coalition dedicated to ending homelessness, we must first have a common understanding of the problem. We must undo the false and discriminatory myths that many people have internalized by telling the story of homelessness in a different way. Once we create that new frame of thinking for people, they'll be ready to implement the solutions we already know work.

It is our hope that you can use these graphics to counter the myths you see and hear on a daily basis, whether that be online or in person. Think of them as a resource, to help you explain to people who are operating on instinct, rather than facts, why homelessness exists in our city, and what we can do to make it a thing of the past. 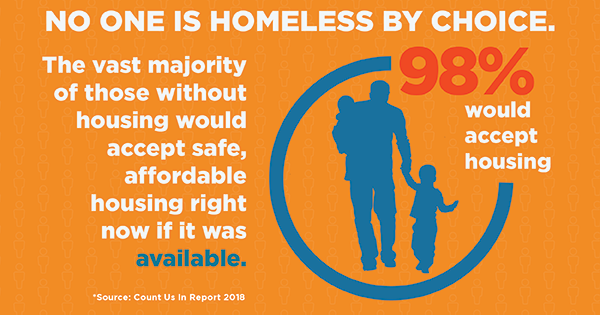