April 30, 2019
How White Consumption Pollutes Black Communities
By:
Eric Bronson
Consumption of products by white Americans is producing pollution that overwhelmingly impacts non-white communities. This disparity between who causes the pollution, and who is forced to suffer from it, is an example of what’s called environmental racism and it has big implications on the health and safety of black neighborhoods like South Seattle.

Pollution, and those who experience it, isn’t distributed equally in America. A recent NPR report highlighted how black and Hispanic Americans are more likely to live in communities with higher rates of air and water pollution, as well as the many health impacts that come from that pollution. One of the key findings of the report was that while air pollution is disproportionately inhaled by black and brown people, the pollution is disproportionately caused in the first place by white American’s consumption.

Environmental racism: what is it?

This disparity between who causes the pollution, and who is forced to suffer from it, is an example of what’s called environmental racism. Environmental racism describes how systems of power like governments and health regulators are unresponsive to the threat of pollution to black communities, while protecting white communities from the same threats. That can be as simple as building a new waste plant near a majority-black neighborhood, but not near a white suburb. Perhaps the most infamous example of environmental racism in the nation is Flint, Michigan's current lack of clean drinking water.

Environmental racism, like all forms of oppression, is layered on top of other types of discrimination, such as segregation, that force people of color into separate neighborhoods that are then polluted. In South Seattle, after the federal government drew up maps denying black homeowners mortgage assistance in the 1930s through the process known as redlining, much of the land along the Duwamish river was segregated as all-black neighborhoods. To this day, neighborhoods along the river are some of the more diverse in the city, and are survivors of decades of environmental racism.

Hazardous chemicals that were banned decades ago have been found at “excessive levels” in the waters of the Duwamish last year after toxic runoff from a Boeing facility in Tukwila made its way into the river. These chemicals are absorbed by fish through the food chain, which makes the fish dangerous to eat. This disproportionately impacts people of color, since subsistence fishing is most common for people with low incomes, and is a generational practice among Native American tribes across the Puget Sound.

That the pollution breathed in by black lungs is largely the product of white consumption shows why it is so important that environmental solutions to pollution and climate change must include voices from the black community. To undo environmental racism, green movements have begun to use a lens of equity towards finding solutions, so that the benefits of a healthier planet are felt by all Americans. After Washington climate activists failed to get the carbon tax initiative passed in 2016, they met with advocates working on the ground in impacted communities like those along the Duwamish. The result was an inclusive and intersectional ballot initiative in 2018, that received 100,000 more votes than the 2016 attempt.

Do you have an experience with environmental racism in your life? Perhaps you moved into a house with mold, or your kids go to school right next to a freeway spewing out exhaust. We want to hear your stories, so we can help build the urgency to our local politicians about how environmental damage and racism intersect. Email us at communications@ywcaworks.org with your story. 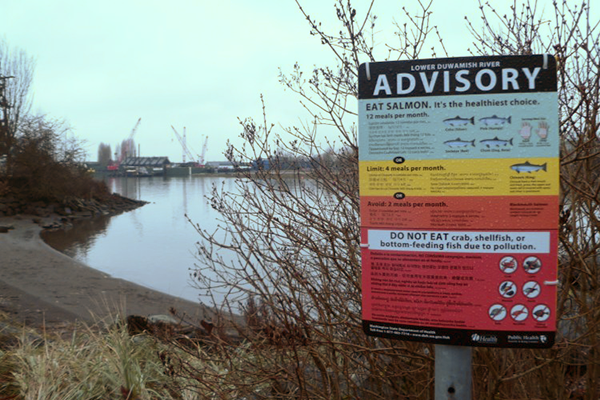